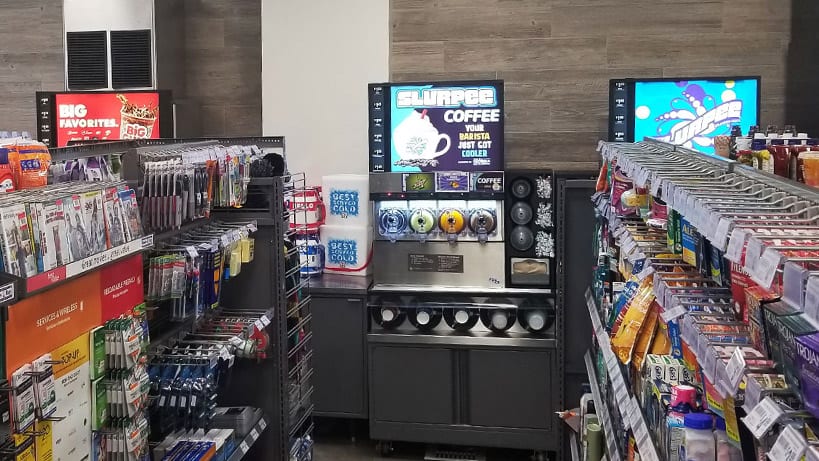 College students run on coffee and snacks. So they were thrilled when a new 7-Eleven® store literally attached to student apartments opened this year near the University of Michigan campus. Our client and landlord, was also thrilled that we completed the store on schedule despite a complex process.

The Foundry Lofts building in Ann Arbor included space on the ground floor for 3,050 square feet that would be turned into the 7-Eleven store. This area was originally planned for retail use and manager’s office along with secured key fob access directly into the lobby for residents.

Real Projectives® took on many roles for this tenant fit-out project. We served as landlord representative and construction manager for the building ownership and the 7-Eleven franchisee / operator. The project team was vast. We also coordinated architects, engineers, general contractors, the facilities team from 7-Eleven corporate, the City of Ann Arbor, and the Michigan State Highway Authority to make it happen.

To begin, we selected a design team and worked through several design options for the retail space which was a new urban concept for the franchise. Not only did we need design approval from the franchisee / operator, but also 7-Eleven corporate and building ownership. Our experience and understanding of the building were crucial in working out store design and use elements, and integrating them efficiently into the building.

Some of our other responsibilities included securing a general contractor to perform the tenant improvement work while also coordinating and adhering to strict franchise build standards. Our prior knowledge of working in Ann Arbor served well when faced with permitting challenges and unique factors of building in the city. Signage demands from 7-Eleven were one example. We used relationships with the Michigan State Highway Authority to negotiate a favorable agreement between our client’s requirements and the existing building’s and City of Ann Arbor’s zoning and aesthetic standards. We then managed the entire project to successful completion.

This was a relatively new concept approach for 7-Eleven. Regular calls and coordination were required to help navigate the process and ensure expectations were being met. While there were some growing pains with this process, consistent communication helped get the project back on track when we encountered bumps in the road.

Raised floor system. Due to the space originally being configured for two separate users with two different finished floor elevations, we worked with the architect-engineer to implement a raised floor system. This alteration created a flat and level plane throughout the entire new store. Due to city code requirements, standard subflooring material (fire-rated plywood) was not allowed, so we opted for a structural concrete panel subfloor system. Furthermore, we avoided core drilling more holes than necessary by using the different existing floor elevations to house piping in the dead-space and consolidate penetrations.

Multiple insulation methods. The store also has large walk-in coolers and a “beer cave” that would span over the differing floor elevations along the rear of the store and over top of a parking garage. This situation required different insulation methods.

Construction of the 7-Eleven Foundry Lofts location was completed on schedule, and its open sign greeted students when they returned from winter break early 2019.

Need help making your project a success? Call Real Projectives at 888.357.7342 to find out how we can help manage your next undertaking.

®7-Eleven is a trademark registered and owned by 7-Eleven, Inc.